Roll Measurements and Tolerances by Application

Profile:
Profile means the diameter differences on the same centerline of the straight roll body, measured to approximately 50 mm (2") from the ends of the roll face. Profile tolerance is the maximum allowable total difference in diameter; so one half of the tolerance affects the paper sheet. When the target shape or zero-line is in the middle of the actual shape profile ± tolerance is used. This means that the area above the 0-line is equal to the area below the zero-line. Usually the absolute roll diameter dimension is unimportant when regrinding a roll.

Taper:
Taper is the difference in diameters at the first and the last stations. Taper applies to both straight and crown rolls. 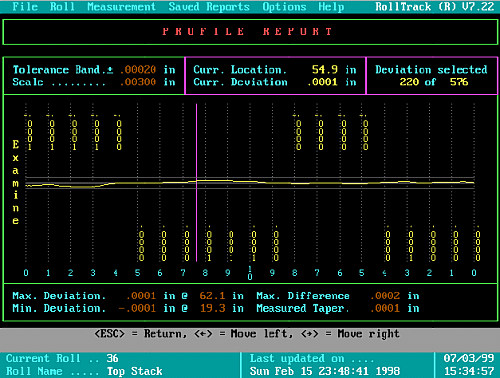 Fig. 3. Roll Profile and Taper.The 'ruler' can be used for values between the stations.
Crown:
The crown target is calculated at each checking station, or continuously, based on the total crown and crown cosine angle. The tolerance is the maximum allowable difference between the actual measurement result and the target at each station. Total crown is the difference between the reading in the middle of the roll and the average of the readings at approximately 50 mm (2") from the ends of the roll face. The end readings are used for taper measurement, too. If the crown is measured with a manual saddle-type roll caliper, starting measuring from each end, the total crown is the average of the roll middle readings. 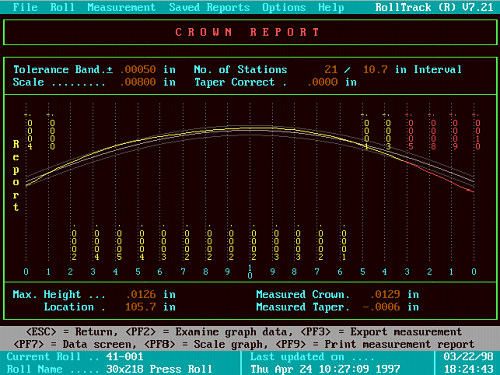 Alternative Profile and Crown Tolerances The above definitions and subsequent tolerances are based on centered graphs, which splits the error on both sides of the target (zero-line or crown target). Sometimes the tolerances are defined with the graph starting from 0. Then the allowable tolerance is a greater value. This practice is used particularly if there is no concavity allowed on a roll, e.g. the deviations from the target are allowed on the positive side only. Concentricity Concentricity is the difference in surface rotation with respect to the rotation of the support surface of the roll. It is measured as a total indicator reading (T.I.R.). Concentricity between two different rotating surfaces can be measured relative to each other using two gages, measured as a difference in readings of the gages. If T.I.R. is measured at the side of the grinding wheel, after grinding, too good result is recorded because the assembly from the roll to the wheel, to the carriage, to the ways becomes almost “fixed” due to the grinding procedure. The largest T.I.R. reading, or grinding error, shows on the opposite side of the grinding wheel. Concentricity should always be taken at the 12 o’clock position of the roll. If the roll is ground on its own bearings, the T.I.R. reading should be taken in the actual nip direction for the most meaningful results. Roundness Roundness tolerance is the maximum allowable difference limited by two true circles with the same center. Roundness is independent from the rotation support surface and possible whip of a roll. Roundness and concentricity are usually measured in the middle of the roll and at each end. Roundness may be a problem when a roll is ground in its bearings, or if a permanent sag has developed on the roll. In both cases, an egg shape is ground initially on the roll by the roll grinder, and a lot of time can be spent achieving the required roundness before finishing the profile or crown can start.

Fig. 5. Measurement of Geometry of Roll. Match two profile 1-1, 2-2 and three a, b, c roundness measurements. 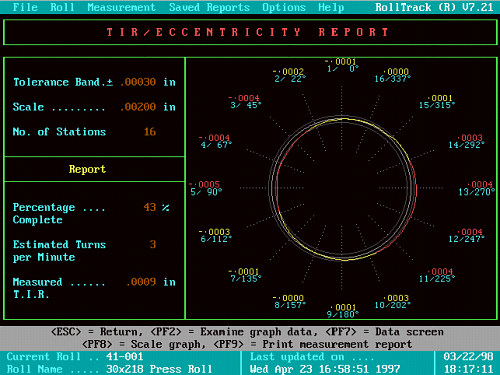 Fig. 6. Concentricity Report.
Temperature
Surface temperature should be taken at each station to be able to adjust measurement results due to temperature variations.